Advocating Classics Education: an update for 2020

The Advocating Classics Education (ACE) project is a national campaign to increase access to the study of the Classical world in secondary schools and sixth form colleges across the United Kingdom. Led by Professor Edith Hall and Dr Arlene Holmes-Henderson and based at King’s College London, ACE is a partnership of fifteen partner universities in Scotland, Northern Ireland, Wales and England. Since 2017, the project has co-hosted twelve high profile events for teachers, students and members of the public to raise the profile, currency and status of qualifications in Classical Civilisation and Ancient History. The project was awarded a major grant by the CA in 2019, and it is my pleasure to provide an update on our activities.

An exciting new development in our collaboration strategy is our partnership with the British Museum. Launched in December 2019, ACE is working together with the Schools and Young Audiences Team at the British Museum to optimise the support available to Classics teachers and students. On 6 December, we contributed to the British Museum’s Troy Study Day, which was a sold-out event for 100 sixth form Classics students and their teachers. Professor Hall gave three subject knowledge enhancement lectures, then a plenary lecture, on themes including Greek drama, Greek religion, Homeric epic and Roman epic.

On 13 January, we hosted an ACE event at the British Museum for teachers only. This lecture provided additional textual breadth and depth for the ‘World of the Hero’ component of A Level Classical Civilisation. Afterwards, attendees were given complimentary access to the Troy exhibition.

On 24 February, we again collaborated to offer ‘OCR Classics in 20 British Museum objects’, a day for learners and teachers to experience the prescribed objects for Classical Civilisation and Ancient History ‘up close’. Afterwards, attendees had free access to the Troy exhibition. Completely free, 125 tickets for this day ‘sold out’ just 48 hours.  Clearly there is significant demand for this type of museum-based learning event.

We held a successful ACE event at the Hunterian museum, University of Glasgow in March 2018. Since then, the Classical Association of Scotland has made good progress in promoting Latin and Classical Studies as Curriculum for Excellence subjects viable for study in primary and secondary schools. We look forward to co-hosting an event entitled ‘Introducing Classics in State Schools’ on 11 March with the CAS and our partner, the University of St Andrews. Invitations have been issued to teachers and school leaders in Fife, Perthshire and Dundee. Contact Nikoletta Manioti at nm66@st-andrews.ac.uk for further details.

Dr Holmes-Henderson has recently made her first trip to the country’s largest Classical Association branch to judge the Lytham St Annes Classics competition on 7 March. This year’s question was ‘Which three characters from the ancient world would you invite to a party and why?’.

On 25 March, Professor Hall and Dr Holmes-Henderson are judging the Latin spelling bee at Harris Academy Chafford Hundred in Essex. 30 schools have entered so it promises to be a buzzy event! Professor Hall will give a keynote lecture to all teaching staff and pupils and Dr Holmes-Henderson will provide a CPD workshop for Classics teachers on Classical rhetoric and critical literacy.

ACE is giving a panel of papers at the CA conference in Swansea on 18 April. Our panel title is ‘Accessing Classical Civilisation and Ancient History in Britain, Past and Present Perspectives’. Professor Hall will provide a historical overview. Dr Henry Stead (St Andrews) will share his research into access to Classics via adult education in the 19th century. Dr Holmes-Henderson will provide and analyse statistics showing who has access to Classics in British schools today and Peter Wright (Blackpool Sixth form College) will talk about the growing community of Classics learners in Blackpool. We will join our partners at Swansea University for the schools’ session on 17 April and will use the occasion of the conference to promote the benefits of collaboration between schools and universities.

Promoting Classical Civilisation and Ancient History around the UK

We continue to visit schools and multi-academy trusts to promote the study of the classical world in translation. Professor Hall has made successful visits to Bristol, Hartlepool, Derby, Bromley, Oxford, Guildford and several London schools in the last few months. In a special initiative, she has been visiting NewVIc Sixth-Form College in East London for the Curriculum Enhancement Programme; this college now has a tradition of sending students to read Classical subjects at KCL. The entire group of Gifted and Talented students came to KCL to participate in a 'play-in-a-day' performance of Sophocles' Antigone, with a workshop afterwards on its relevance to political problems today. Professor Hall was also a keynote speaker at a national conference on Curriculum Enrichment at NewVIc in January 2020.

Dr Holmes-Henderson is also providing CPD workshops for English teachers this year. On 1 February, she was the keynote speaker for the TM English Icons conference in Sheffield, and in June she will lead a session at TM Leeds. These events are attended by hundreds of English teachers and are an excellent way of showcasing the appeal of Classical subjects.

Professor Hall has organised, hosted and spoken at several events in the winter of 2019-2020 at KCL. Large groups of school students have come to hear bespoke lectures connecting the ‘World of the Hero’ option to the Troy exhibition at the British Museum; particularly successful events have been run for Runshaw College and Maidstone Grammar School. 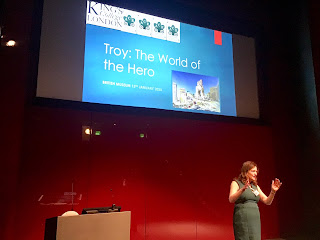 Following our highly successful teachers’ summer school in July 2019, we have uploaded a range of resources to support the learning and teaching of Classical Civilisation qualifications in schools.  These include videos from KCL academics on GCSE, AS and A Level components, and accompanying powerpoint presentations and handouts.  See the ACE website for full details.

We successfully applied for funding from Research England to accelerate the strategic impact of our advocacy work, and in 2020 we will work with key stakeholders in Westminster, Whitehall, the Senedd, Holyrood and Stormont to raise the profile of Classical subjects within national curricula and assessment frameworks.

International interest in the work of ACE continues to grow; in April and May, Professor Hall will be addressing national conferences of teachers and classicists in both Belgium and the Netherlands on the merits of Classical Civilisation and Ancient History courses and ways to introduce them. We are thrilled to be continuing this important and exciting work for Classics education nationally. If you have any requests, suggestions or ideas you’d like to share with us, please email us at ace@kcl.ac.uk.


Posted by Classical Association at 08:13