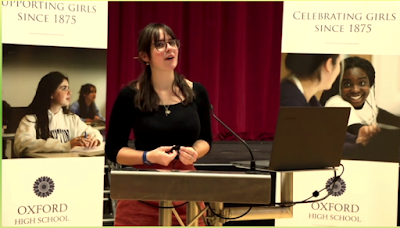 On the 4th of November we hosted a virtual Classics conference, which we started planning in early September. This initially seemed like a daunting task, as we’re both Year 12 students at Oxford High School with no prior experience of running an event like this, however we quickly devised a plan. Our aim was to make it accessible to all ages and levels of experience, giving a glimpse of the Classical world beyond the curriculum and hopefully inspiring a love of Classics along the way.

The morning was dedicated to a series of workshops aimed at Years 7-9. We wanted to choose a theme for the workshops that would engage this age group, deciding on ‘The Gory Truth of the Classical World’. The two of us kicked off the day with a presentation on five ‘Evil Emperors of Rome’, complete with a quiz and fun facts drawn from the likes of Suetonius and Herodian. An incredible workshop on Roman Slavery by Dr Olivia Elder followed, in which she encouraged her audience to consider the variety of experiences of Roman slaves by looking at primary sources and drawing their own conclusions. Dr Alfonso Moreno then spoke on the (brutal) Athenian justice system and its punishments, pushing his audience to think about what we can learn from it, and the relationship between justice and democracy. 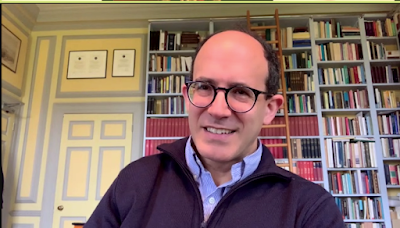 The timings for the afternoon were tight, as we had six fantastic speakers to fit in, but thankfully everything ran smoothly. Professor Oliver Taplin opened with ‘Are Greek tragedies necessarily misogynist?’ He discussed several critical interpretations of tragedy, using Antigone, Medea and Clytemnestra as examples. Professor Rosalind Thomas came next, with an engaging talk on ‘Memory and Historiography,’ which introduced the idea of collective memory, and how different narratives of certain events can come into conflict, including examples drawn from Thucydides’ History of the Peloponnesian War.

After that, we heard from Professor Phiroze Vasunia on ‘Classics and Colonialism’, an interesting overview of the influence of Classical architecture on the British colonisation of India. Using images of ‘classicised’ Indian buildings he expertly illustrated the far-reaching effects of Classics long after the fall of the Roman Empire. Dr Alison MacDonald next gave an illuminating talk on ‘Identity and Mobility in Roman Britain,’ using the archaeological record to prove that Roman Britain was incredibly diverse despite its portrayal in the media. 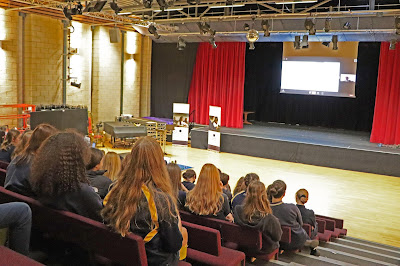 Our penultimate talk was from Professor Llewelyn Morgan, with the vivid title ‘Vile Violence in Virgil’. Though much of the Aeneid deals with violence, Professor Morgan looked at Aeneas’ actions in Book 12 and how some - for example human sacrifice - would be considered reprehensible even to the Romans. Last but certainly not least, we welcomed Dr Henriette van der Blom, speaking on ‘Roman Oratory - Where are the Women?’ She focussed on the rare occasions when women were compelled to speak in public - one notable example being Hortensia, who spoke against the imposition of a new tax on women.

Throughout the day, over 700 secondary school students and teachers from around the country attended online, while approximately 250 Oxford High School students attended in-house bringing the total audience to nearly 1000. We both learned so much while organising this conference, and although we were nervous at first, we enjoyed the day enormously. We wanted to reach as many people as we could and give them a different perspective on the study of Classics, and from the feedback we received it seems as though we reached that goal! 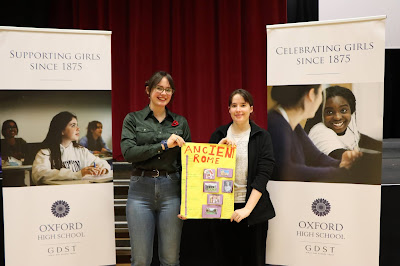 The organisers with a poster made by some Year 7 students

Posted by Classical Association at 05:44 No comments:

Engaging Children with Classical Mythology: 'Once Upon a Myth' 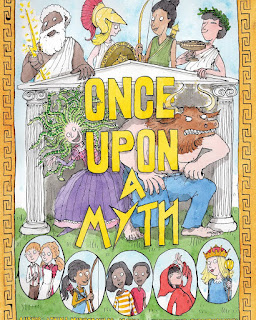 Once Upon a Myth (Olympia Publishers, £9.99 $12.99) is a collection of five stories that blend fairy tales with Greek myths. Hansel and Gretel meet the Minotaur, Prometheus and Pandora climb the beanstalk, Penthiselea is merged with Cinderella, Little Red Riding Hood faces Dionysus, and Snow White is combined with Medusa. Each story is written in rhyming couplets which creates a fun mood to these newly imagined stories. For example, Prometheus, Pandora and the Beanstalks start like this:

In the mythical times, set long ago,

No, our story starts in a cold and dark land,

Where all were under cruel Zeus’ command.

They serve as an introduction to Greek mythology and have a helpful, educational glossary at the back to support the learning of new characters and monsters.

Having taught Classics for almost ten years, I know that personal interaction and activities are vital to promoting and inspiring an interest in the ancient world. I am therefore also running a series of workshops and talks at various schools and community centres to promote the book and mythology in general. A fee is asked when doing a series of workshops, however this is not applied to state schools or community centres. I have two types, though each is adapted to the given centre. Firstly, I have a Mythology Creative Writing workshop for years 7-9 where I discuss the appeal of mythology over the ages and how it is possible to retell one of these famous stories in a unique way, despite their popularity. Pupils are then encouraged to write their own version of a Greek or Roman myth. Secondly, I offer a Mythical Monsters workshop, aimed at years 4-6. This goes through a wide range of mythical monsters, from the well-known Medusa and Minotaur, to the lesser known Lamia and Chimaera. Pupils create top-trump style cards which are used for an activity and they are then encouraged to design their own mythical monster, inspired by the ones discussed. I am running these at state and private schools, as well as local community centres, and am very keen to continue offering these in the future. 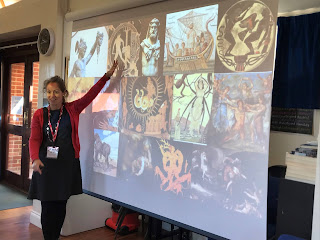 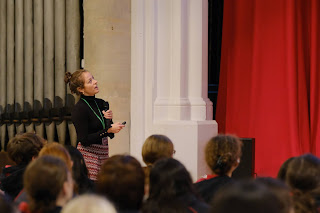 From a recent workshop at Cranleigh Prep School, one pupil reported back that "the talk was excellent, and Mrs Mitropoulos-Monk was very inspiring.”

Another parent posted “My son absolutely loved it! Thank you. We are reading it every night!”

If you are interested, please email me at athina.mitropoulos@gmail.com

Posted by Classical Association at 04:28 No comments:

My forthcoming book, “An Ancient Greek Philosophy of Management Consulting: Thinking Differently about its Assumptions, Principles and Practice”, explores the work of ancient Greek Philosophers from the end of the 6th century BCE to the end of the 4th century BCE, in a search for new perspectives on the management consulting industry. The publisher, Springer International Publishing, has announced details of the book at the following link: https://www.springer.com/gb/book/9783030909581. In his Foreword to the book, Andrew Pettigrew - Emeritus Professor of Strategy and Organisation, Said Business School, University of Oxford – speaks of "its capacity to shape the theory and practice of management consulting and the development of the scholarly field of management itself".

The ancient Greek philosophers thought deeply about these kinds of questions, but they approached them from a very different intellectual tradition from our own, and they were responding to social and economic conditions that were wholly unlike ours. The distinct perspectives that are reflected in their work provide a rich resource for novel thinking about contemporary philosophical questions, including those arising in so modern an industry as management consulting. The speculations of Heraclitus, Parmenides, Leucippus and Democritus about the nature of the universe have the power to stimulate useful new perspectives on the nature of organisations and management consultancy interventions in them. Aristotle’s development of virtue ethics has a distinct contribution to make to assessments of what constitutes ethical practice in the professions and in business, including management consulting. Plato’s theory of knowledge and belief, and Aristotle’s distinction between wisdom (sophia) and prudence (phronesis), are invaluable in assessing the kind of knowledge that management consultants need, and are capable of possessing.

The endeavour to acquire some depth of classical knowledge is, however, necessary in order to unlock the rich seams of useful novelty that lie embedded in the work of these ancient thinkers. Distinct, ancient religious beliefs run through much of the work of these philosophers. Thus, Heraclitus’s belief that much, if not everything, in the universe consisted of continually changing flows, like the flows of water in a river, rather than static substance, can properly be understood only in the context of his belief in divine Justice (dike), that is, the order of the universe that had been ordained by the gods, whereby there was continuity in the universe that enabled us, for example, to be assured that the sun would rise each morning and set each evening. Plato and Aristotle lived in the city-state of Athens, and their notions of what constituted moral behaviour could not be separated from their beliefs about the ways in which people ought to behave towards each other in this powerful, maritime state that was yet probably no more populous than the English city of Wolverhampton. Moreover, these philosophers revealed their ideas in language that often defies translation; for example, the usual translation of “virtue” only partially captures the sense of the Greek word arete as it appears in the work of Plato and Aristotle, and the shifting in meaning of the Greek word hamartia between a “missing of the mark” or a “mistake” to, in Christian texts, “sin”, makes Aristotle’s use of it complex and even debatable.

Management consultants’ rhetoric typically promotes the notion that they have methods that enable them reliably and predictably to bring about particular kinds of organisational change that their clients desire. Consideration of this rhetoric in the light of comparison with the speculations of the Presocratic philosophers, and with the ideas of Plato and Aristotle on knowledge and reasoning, suggests possibilities for different perspectives on the kinds of interventions that management consultants make and the nature of management consultancy knowledge.

Book retailers such as Amazon will announce the book in the near future.

Dr David Shaw is an independent researcher on the philosophy of management, and a former Teaching Fellow at Queen Mary University of London and Visiting Lecturer at the University of Greenwich Business School.  David graduated with a degree in Classics from Oxford and spent 22 years as a management consultant, with UK-based and international experience in organisational change management.

Posted by Classical Association at 06:42 No comments: