'The Song of Arms and a Man' (The Latin Qvarter) 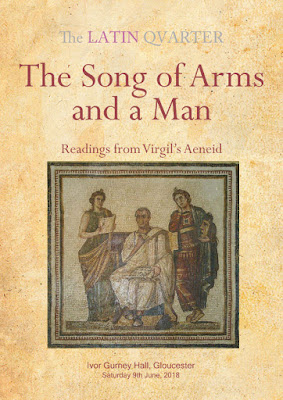 The performance of 'The Song of Arms and a Man' at the Ivor Gurney Hall in Gloucester on 9th June was a very unusual experience because it was the first time that I had ever heard Latin used as the language of a public performance. It turned out to be a fascinating and stimulating recital of great poetry and drama.

I am a former teacher of modern foreign languages and a translator, and I studied Latin at school to ‘O’ level in the sixties. Although I have, of course, always found Latin to be invaluable in understanding my own language and in learning other languages, I did not continue any direct contact with it.

However, in recent years I became interested in getting more closely acquainted with Latin again, and my current level of competence comes from having have studied a variety of texts, and poetry from Virgil and others, at Gloucester in recent years on Latin Qvarter courses. I have always enjoyed contact with other languages and this includes, on occasion, novels and poetry.

The recital was therefore of a text with which I was familiar to a certain extent, but which I would not have been able to read or listen to without preparation.

In the audience the text was available in a booklet. It was difficult to decide whether to look at it or not during the performance itself though. In the end I tried not looking at it, and found that I could be carried along by the language and follow the action. I tried to use it as a quick guide, but not get distracted by reading. Of course, there is some loss of comprehension to be taken into account if this is done, and so I had to strike a balance. 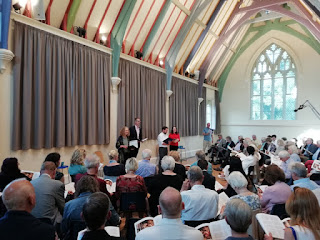 The readers and audience in the Ivor Gurney Hall
© Edward Gillespie

The readers were real actors in their presentation. They projected their voices very clearly and resonantly with plenty of expression, and it was a delight to be able to pick up whole phrases at a time without having to try hard. I am interested in how Latin must have sounded, and I felt that a great effort was put into making it as lively and natural as it could be. As a result, we really felt that we were sharing in something across a very long span of generations and across a great cultural distance! 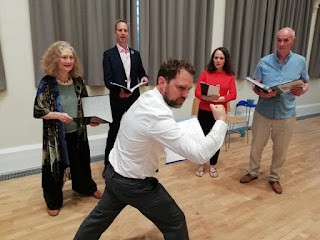 Turnus (Steve Wright) showing his resolve to resist the Trojans.
Others behind L to R:  Emma Kirkby, Matthew Hargreaves, Elizabeth Donnelly and George Sharpley.
Overall, the performance was a little like seeing a well-performed Shakespeare play. That is, the language is difficult but we are carried along by the drama of the situation all the same, and we enjoy the language, imagery and turns of phrase as the play moves forward.

If a person in the audience had no knowledge of Latin at all, they might well still find it very interesting to hear it brought to life in such a way. Besides, so many elements of the tale have been handed down to us and form part of the common stock of our understanding about the past. The course of the story was explained between the readings, so the audience could follow the dramatic thread. The readers provided plenty of facial expression, gesture and intonation to help the audience along. 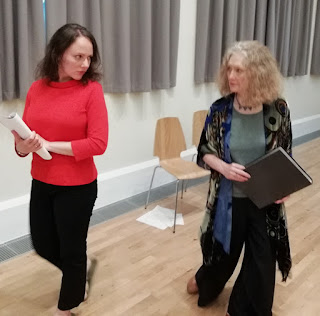 Venus (Elizabeth Donnelly) and Juno (Emma Kirkby) stalking each other like cats ...

It was an excellent event and I would like to thank the performers and organisers for all the preparation and hard work which must have gone into it.

Posted by Classical Association at 06:14 No comments: