Dr. Maria Fragoulaki (Cardiff), Visiting Fellow at the Institute of Classical Studies (2018-19), reports on a day on Thucydides’ modern reception hosted by the ICS earlier this year.


(this blogpost is reproduced here with kind permission of the ICS, having first been published on 28 June 2019 on the ICS Blog, which can be found at https://ics.blogs.sas.ac.uk/) 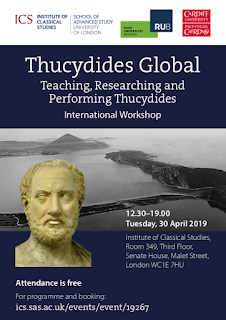 What do an analysis of the ‘chain of participles’ in Thucydides’ History of the Peloponnesian War and its implications for the text’s translation and poetic qualities, online games based on the Melian Dialogue and ‘Thucydides Trap’, the International Relations catchword, have in common? The answer is that they belong to the diverse and dynamic space of Thucydides’ modern reception. These and other themes, such as Thucydides’ role in the life and work of twentieth-century politicians, modern theatrical adaptations and performances of his History, and his re-invention as International Relations guru by modern American politics of the 1950s and the 1960s, were explored at the international workshop on ‘Thucydides Global: Teaching, Researching, Performing Thucydides’, which took place on 30 April 2019, hosted by the Institute of Classical Studies. The event aimed at a ‘global’ approach of Thucydides’ modern reception through a variety of themes and media, with participants from within and outside the academy, from the UK, Germany, US, Brazil, and Greece. The workshop was a collaboration of Cardiff University and Ruhr Universität Bochum in Germany, and was supported by the Society for the Promotion of Hellenic Studies and the Classical Association, UK, who subsidised Cardiff University students to attend the event. The papers themselves, the interaction between the speakers, and the involvement and comments of the audience, all contributed to the day’s ‘global’ success. The day opened with a welcome address by the Director of the Institute of Classical Studies, Greg Woolf, followed by a brief introduction by me in which I aimed to present the rationale and scope of the workshop.

Thucydides’ text has broken the boundaries of its time, having had a formative influence on political philosophy, International Relations (IR), history writing, philosophy of history, art and literature. In an increasingly interconnected world in financial, cultural and political terms, the historical lessons of this ‘difficult’ and long historical narrative from ancient Greece appears to be a source of inspiration for groups and individuals in the academy and beyond. Thucydides is a staple of any introductory course to IR theory, and is often quoted (or misquoted) in modern political debate and less expected contexts, such as mindfulness training or new age wisdom, as Neville Morley reminded us. In addition to IR and politics at large, the day also comprised papers on the poetics and politics of Thucydides’reception, through the themes of translation and performance, two under-explored areas.

The term ‘global’ in the title of the workshop was used to signpost the text’s prismatic quality and our aim to explore the potential of breaking boundaries which traditionally tend to divide the field: one ‘compartment’ can be described as ‘mainstream reception’, with special focus on political science, IR, anthropology, social science etc; and another is occupied by the so-called ‘traditional approaches’, largely text-centred, and heavily pre-occupied with the problems of philological and historical scholarship from different perspectives. Both ‘compartments’ were represented in the workshop by experts who have devoted considerable amounts of time, energy and care to this ‘global’ author and are open and committed to continued dialogue and exploration.

There is something paradoxical about Thucydides’ work: on the one hand it is a text that famously resists easy interpretation (and translation), containing abstractions and ambiguities (especially in the speeches), and on the other it has been used a lot for maxims or crude historical analogies and interpretations. Christian Wendt discussed Thucydides’ ‘labelling’ and itemisation in relation to the idea of ‘Thucydides Trap’, an IR maxim of global buzz, and the text’s suitability for inspiring political analogies. The problem of crude interpretations in the area of IR theory was also touched on by Neville Morley, who concentrated on the famous Melian Dialogue and its potential of providing means of interpreting situations in real life (see Neville’s blogpost reflecting on the day). Undeniably, one real-life analogy in the light of Yanis Varoufakis’ engagement with game theory could be the ‘Parallel [to an extent] Lives’ or rather ‘Parallel Dramas’ of Grexit and Brexit; although on the day we all appeared to have tacitly agreed not to engage head-on with these words. Another ‘false myth’ was deconstructed by Liz Sawyer, who demonstrated that Thucydides entered the field of IR theory as ‘founding father’ later than is often assumed, namely in the 1950s and early 1960s, as a result of a combination of factors related to US educational policy, ideology and rhetoric, the end of WWII and the start of the Cold War.

Thucydides as source of inspiration and subject of study for two politicians and men of letters of the modern era of different backgrounds was the subject of two papers: one by Hans Kopp, who examined the case of the Danish Minister of education and classical philologist Hartvig Frisch (1893-1950) in the 1930s and 1940s; and another paper whose subject was the Greek Prime Minister Eleutherios Venizelos (1864-1936) and his translation of Thucydides’ History, delivered by Sir Michael Llewellyn Smith, himself a man of letters and political action, with a long career as a diplomat. In both papers the question of translation of Thucydides’ text also emerged; this also took centre stage in the paper of Sandra Rodrigues da Rocha. By concentrating on markers of oral language in Thucydides, namely ‘chains of participles’, Sandra explored the oral, poetic and emotive qualities of the text in the framework of the act of translation.

Translation is a creative process and delivers a new text. The boundaries of creativity are explored even further when translation is combined with adaptation for the stage, which was the theme of John Lignades, member of the ‘Dramaticus’ team (bringing ancient Greek history on stage) and the Hellenic Education and Research Center (HERC), an educational organisation facilitating study abroad programmes in Greece focusing on interdisciplinary classics. John presented the ‘Lessons of War’, a theatrical play based on Thucydides, which was created in the so-called Greece of the crisis (post-2010 Greece) and was staged in major venues in Greece and at the European Parliament in March 2019. The symbolism of this modern political forum hosting a performance related to the Athenian democracy of C5 BCE is unmissable. Paul Cartledge, a ‘global’ ancient historian and expert in the reception of ancient political thought and institutions, also familiar with the work of the ‘Dramaticus’ team, introduced the presentation.

The last part of the workshop comprised short responses-comments by three interdisciplinary classicists. Dan Tompkins presented us with an alternative and intriguing panorama of IR perspectives and experts.Peter Meineck, also a theatre practitioner, concentrated on the theatricality and experiential-cognitive-therapeutic dimension of Thucydides’ war narrative. Sara Monoson commented on crisis and Thucydides’ use as source of inspiration in such moments, considering how we might think about what makes a particular point of reception significant. The idea of Thucydides’ cherry-picking surfaced again and the criteria which might lead our choices. Sara’s comparative examples drew on American political oratory and the play ‘Acropolis’ (1933) by the American playwright Robert Sherwood. The day generated vibrant dialogue and exchange of ideas, with which we hope to continue. Thucydides’ de-compartmentalisation in progress…

Posted by Classical Association at 05:14 No comments: