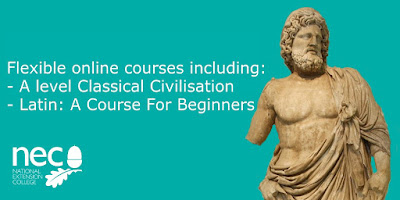 The National Extension College (NEC) is a pioneer of online and distance learning, existing to transform lives through education.

Our online A level Classical Civilisation and Latin: A Course for Beginners enable learners of any age and background the opportunity to access tutor-supported courses. Students are able to step back in time to explore the Greco-Roman world wherever they are and at any time, widening access to these dynamic subjects.

Students enrolled on A level Classical Civilisation with NEC study poetry, plays, comedy and themes such as cults, rituals and religion. Along the way, they make fascinating connections to the politics, culture and society of ancient Greece and Rome.

Homer’s Odyssey, Vergil’s Aeneid and the works of Euripides, Sophocles and Aristophanes transport students to the ancient world.

NEC student Julia: “Classical Civilisation A level wasn’t offered by the last school I went to...It’s down to NEC that I was able to go to university, and that I studied the subject I have loved since being a child...I’m sure my life would have taken a very different course without NEC.” - Julia went on to study for a BA in Classical and Archaeological studies with French at the University of Kent. She then completed a Masters in Ancient History at King’s College London.

Through this course, students make an informed analysis of the issues and values that shaped classical civilisation. They learn how to develop and present coherent, well-evidenced arguments and also sharpen their analytical and critical thinking, skills that are vital for higher education and the workplace.

Studying A level Classical Civilisation opens up a wide range of opportunities. Many of our students go on to study a classics course or other subjects at university and pursue varied career paths.

NEC student Miranda studied Classics at the University of Cambridge and then an MSc in the Evolution of Language and Cognition at the University of Edinburgh. She says: “What my educational journey has taught me is that life is not limiting in terms of what you can learn and how you can go about learning it. Further, the need to work does not inhibit study if you choose the right support networks. NEC has, thus far, been the best institution to understand this.”

Latin: A Course for Beginners

NEC’s ‘Latin: A Course for Beginners’ enables students to develop their language skills and read Latin texts in their original.

Students on the course are given the opportunity to study and translate extracts of texts originally written in Latin; these sources include extracts from the Aeneid by Virgil, letters written by Caesar, fables by Phaedrus and a ghost story from the Letters of Pliny. Working with these extracts gives students a true sense of the language and, coupled with the additional background topics on Roman history, provide a rich beginning to a fascinating area of study.

NEC tutor Ed: “Learning Latin (and Greek) and being able to read the literature in the original has been the most rewarding and enriching experience of my life. If you’re interested in literature, of any kind, literature that excites the imagination, strikes awe into the soul and invites you into some of the most fantastic minds ever to record their thoughts in words, it’s all there. Virgil, Catullus, Cicero, Tacitus, Livy: these are incomparable writers...but by heaven when you know the original you see so much more...So, if you want a challenging, intellectually satisfying, life-enhancing opportunity, studying Latin is it.” - Ed is our lead tutor in Economics, Classical Civilisation and Latin. Ed studied Classics at Trinity College Dublin and then at Gonville and Caius College, University of Cambridge, where he conducted research into the narrative technique of Greek epic; he later studied economics and linguistics at the Open University.

Latin is also a springboard for students to understand other subjects more deeply:
Humanities - studying Latin helps students gain a deeper understanding of the English language, with Shakespeare and Milton drawing extensively on their knowledge of Latin literature. Moreover, the foundational ideas of history, philosophy and theology are often based on works written in Latin.
Other languages - students wanting to progress to study other languages find Latin a great option as it is the root of European languages such as French and Spanish. Showing an aptitude for languages through Latin extends to computing, where programming languages are used.
Law - not only do many legal terms derive from Latin but by studying the subject, students showcase their ability to analyse information and learn a new language.
Medicine - like law, much medical terminology derives from Latin, enabling students to understand the roots of words they come across.
Art - an understanding of the artworks of the ancient world is enhanced through knowledge of Latin. A pairing of arts and languages can prepare students for work in conservation and curation, or aid their travel experiences.
The ancient Greeks and Romans created a legacy that has shaped literature, language, arts, politics and philosophy. We are proud to be able to offer Classical Civilisation and Latin to learners across the UK and beyond.
About the National Extension College
Co-founded in 1963 by Michael Young as a forerunner for the Open University, NEC is a long-standing independent educational charity.
NEC provides both a solution for schools wanting to maintain a broader curriculum and for adults and young people wanting to engage in lifelong learning.
Features of studying with NEC include: flexibility, personal tutorial support, bespoke course materials and an exam booking service.
Rea Duxbury is Marketing & Research Assistant for the National Extension College