Classics in Primary Schools? It's All Relevant!

The following blogpost by Amber Taylor was first published on the Classical Association in Northern Ireland Blog in July 2018, and is reproduced here by kind permission of the CANI.

When I left high school a few years ago, having studied Latin and Classical Civilisation to A level and progressed to study Primary Education at University, I made a promise to myself that I would teach Classics to children in whatever way I could. But more importantly, I would try to stoke the same passion and excitement for the subject in the children I would teach as my own teachers had in me. On my second block placement with Stranmillis University College at Whitehouse Primary School, Principal Frazer Bailie (whom I would like to thank immeasurably for allowing me into his school and having the chance to bring Classics with me) kindly gave me permission to host a Classics club for Key Stage 2 children every Tuesday afternoon for five weeks. Suffice to say the classicist in me was elated. 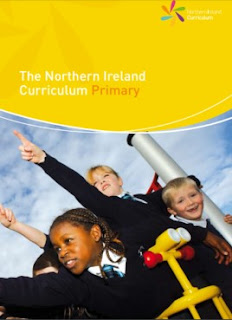 I should explain that I am a student primary school teacher, and so the idea of running an entire club from start to finish was a bit intimidating, even with previous experience of working with children in extra-curricular activities. So as I sat down to plan my five-week scheme of work I thought “how do I make this relevant?” Because that’s the key in teaching, isn’t it? Make it relevant, make it fun and the learning will follow. At the time, I realised that the chances were that the children I would be teaching would never have had any formal experience in learning Classics, and so it was up to me to make sure they formed a love for it.
In my training at Stranmillis we are told to make topics as cross-curricular as possible, meaning you can teach Music through Literacy or Numeracy through World Around Us (History, Geography and Science and Technology) topics. I am of the opinion that Classics is the perfect cross-curricular topic and so that is how I set out in planning my Club – not only was it going to be fun, it was going to be as enriching as possible.
Five weeks, five lessons and a whole lot of Classics to cram into my short time-slot, but I was determined to make the most out of my time at Whitehouse. Week One started with a brief introduction to Classics. An exploration, if you will, of the topic as well as the beginnings of Latin. Over twenty Key Stage 2 children involved in the Club seemed enthralled that their first taste of Latin was casting Harry Potter spells – certainly a deviation from the routine Numeracy and Literacy! This not only captured their attention straight away, it meant that from the very start of their Classical education they were expanding their vocabulary (a statutory requirement in the Northern Ireland National Curriculum). “Expecto Patronum!” shouted eagerly throughout the halls of Whitehouse Primary School quickly turned into a discussion of what a patron was and how the word ‘expect’ comes from the Latin verb expecto.

Moving on to the first few pages of the Cambridge Latin Course (Book I), the children got a taste of some of the first stages in learning Latin when they reach post-primary. With some background to Pompeii and an interesting family, the children were able once again to explore the Latin language. They especially enjoyed the flash card pop quiz at the end, with the all-important Haribo on offer should they get a new vocabulary word correct. 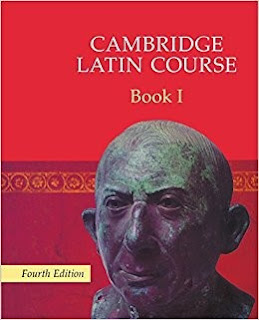 The Classics Club was off to a roaring start, with some new children joining the following week, having heard of the fun already had in the early stages. Week Two proved a challenge to plan. Do I follow the Cambridge Latin course for the next four weeks or do I vary what parts of Classics the children should experience? I decided, for the time being, to continue with more of the Cambridge Latin course so that the children could begin to formulate simple sentences in Latin. So we moved on to Roman houses. Some background and context started us off, generating a comparison of Ancient Roman houses and houses today and so another way in which Classics can be used as a stimulus for the Northern Ireland National Curriculum. The young classicists then moved on to learning the Latin names for Roman rooms using flash cards (and an exaggerated Italian accent!). Using an A1 poster of a cross-section of a Pompeian Villa and some laminated character and word cards, the children solidified their knowledge of Latin words and phrases. If I said “Caecilius est in horto” they would have to place Caecilius on the correct place on the board. A competition began, sweets were given out and the next generation of classicists began to see that Classics really was worth learning (hopefully because of more than just the promise of sweets!).

For Week Three, the Classics Club took a flight from Ancient Rome to Ancient Greece, and rolled up their sleeves ready for what I had in store. So far, I had managed to link Classics to Literacy, Drama and World Around Us in the Northern Ireland Primary Curriculum, but now it was time for some Music. And what better way to do this than to learn to rap the Ancient Greek alphabet? Through the YouTube video above, the children were soon able to rap the alphabet on their own, knew where our current alphabet came from and even managed to write out all the Greek letters. Out of all the sessions we had together, this was the most fun for children and teacher alike. It allowed us to let go of our inhibitions and learn a song we could impress our friends with later. I’ll forever cherish the memory of walking twenty children out to the front gates to meet their parents whilst singing the Ancient Greek alphabet! 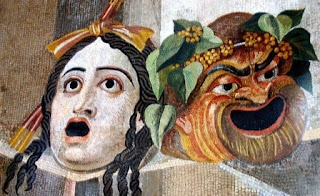 Week Four continued in Ancient Greece with Drama and Theatre.  Incorporating both Art & Design and Drama into one lesson was no small task, but the children delighted in the great variety Classics was providing, decorating Greek tragedy masks and trying on togas and stolas. It was certainly quite different from their normal school-day activities!
Week Five finished the Classics Club with a return to Ancient Rome, specifically its dining-table. If time and culinary skill were on my side, I might have served a banquet of dormice, flamingo tongues and garum but alas, there was just a selection of peach juice and iced buns on offer. I sat down and discussed with them the food served at the dramatic parties hosted by Caligula (a P.C. version!) and took the opportunity to answer questions on Classics at post-primary level, with many students taking a keen interest in the possibility of continuing the subject. Perhaps this was an indication of the success of the Classics Club. 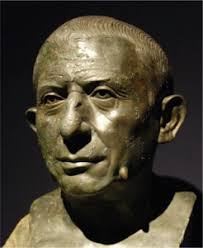 All in all, my wonderful experience at Whitehouse Primary School showed that Classics can not only be brought into the minds and hearts of primary school children in a meaningful way, it can also be linked to the Northern Ireland Primary Curriculum through a variety of class subjects.  However, the most important thing was the joy that Classics brought to the children I taught. Their engagement and excitement at each new topic gave me hope that there is a future for Classical education in Northern Ireland, and reminded me of just how important it is that this versatile subject is considered to be relevant to the children of today.
Amber Taylor
Posted by Classical Association at 08:07 No comments: