Actors of Dionysus (aod) was founded in 1993 to put flesh on the bones of ancient Greek drama and to provide innovative and accessible versions of this rich canon of work. Since then, we have toured over 50 radical and highly visual productions of classic Greek plays and new writing inspired by myth, performing to over 750,000 people nationally and internationally and becoming the UK’s leading interpreters in this field.
We have toured extensively throughout the UK and Eire, performing regularly at venues including York Theatre Royal, The Lowry, Theatre Royal Winchester, Brighton Dome, Greenwich Theatre and The Other Palace. We also perform at international festivals including the Edinburgh Festival Fringe and High Fest, Armenia, as well as in ancient theatres in Greece, Turkey, Croatia and Albania.
aod is divided into three strands:
aodProductions tours new theatrical adaptations of ancient Greek drama and new writing inspired by classical mythology;
aodEducation tours high-quality productions and produces a rich and varied outreach programme including workshops, books, DVDs, audio-CDs, pre- and post-show lectures and discussions for schools, colleges, young people and students in higher education;
aodEvents produces ambitious and high-end one-off performances in distinctive venues with some of the UK’s leading performers. 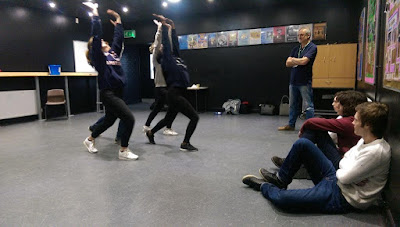 © aod
We have been working on a campaign of free workshops for schools and colleges this year, running Classics and drama workshops in state schools and colleges in London, and targeting groups that would not usually have access to external facilities and material to support their learning.  Our fantastic Education Officers have visited a wide range of schools and colleges in the London area with our bespoke workshops, working with students on Antigone and Lysistrata and looking at the Greek chorus, conventions of Greek staging and the tragic hero. The campaign has had an amazing response, highlighting not only the demand for external practical educational support, but also the relevance of the Classics today. We strive to keep the Classics alive in education, working practically with students to re-stage them in modern, exciting ways, and this campaign has highlighted the fun that students have when working in this way:
‘We loved the new approaches to the text - this has worked really well in subsequent sessions, and students are still using them.’
Rowenna Mortimer, Working Men’s College

‘The whole workshop was wonderful! My students enjoyed it immensely and were inspired by Mark’s enthusiasm for Greek theatre. We are rarely able to have workshops because of the expense so thank you so much for giving us this opportunity.’
Izzy Forrester, Archbishop Tenison’s School 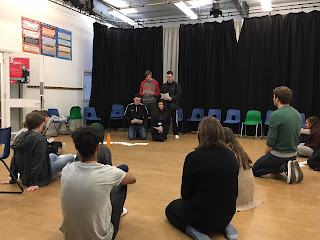 © aod
In April, the Classical Association kindly awarded us £2,000 towards our ‘Exploring the Classics’ Workshops and Education Pack Project. This funding will allow us to roll out our free workshop project across the country next year, as well as enabling us to create a new Medea education pack which will be offered as a free learning and teaching resource. We will be able to further expand access to the study of classical Greek drama and literature, and it will enable us to reach thousands of additional students across the country with educational resources that will support, promote and advance the study of Greek theatre for years to come. We are very grateful to the Classical Association for helping to support projects which make a real difference to students who may not otherwise have access to these kinds of resources.

To enquire about booking a drama or Classics workshop for your school, college or university, contact megan@actorsofdionysus.com

Posted by Classical Association at 08:20