The Durham Sixth Form Centre was awarded a grant of £415 by the CA earlier this year towards the resources required to create an immersive classroom, with the aim of inviting primary schools to take part in lessons about the Ancient World.  Now that the project has been firmly established, it is hoped to hold the sessions more frequently and to run them at local primary schools.


We have twice approached our local primary schools to offer to take their studies on Greece and Rome very much further with an immersive and interactive experience. Costs and time meant that we have to cap this oversubscribed option at 4 classes (c.120 students). Students came in and did a quick session connecting labels to parts of a temple. They also listed the things they needed in a modern classroom to be a point of comparison with the ancient.

The students were then divided into two groups: 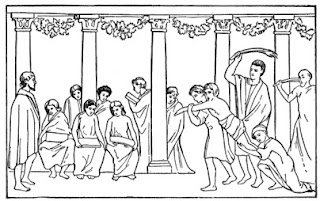 The first – suitably dressed in costumes - went into our classroom and did a series of activities: chanting the Greek alphabet, chanting the Latin numbers, writing on ostraka, writing on cerae with styli, watching (and counting in Latin) our volunteers being beaten, in line with evidence from pictures such as the one above and reading texts in scriptio continua on papyrus.

I would like to acknowledge a massive debt to Professor Dickey who shared ideas and a chapter of an unpublished book to help with this aspect.

The other half of the group made use of their new facts about temples to build these from confectionery.  Although we did encounter sacrificial octopuses and unicorns (!), it was clear that ideas about what a temple was for and how it was used were involved in their decisions, and some groups had a go at a Pantheon-style domed roof using some impressive round-biscuit corbelling: 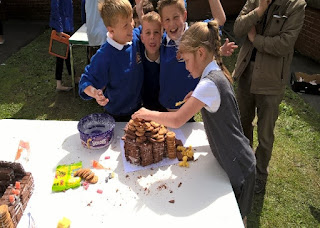 Students then swapped their roles (Temple ↔ Classroom). At the close students identified the differences between what they had listed about classrooms and what they had found, and also filled in coloured stars describing one thing they had learned about Temples, one about Education, and the thing they had most enjoyed. No students struggled to identify things learned and all had enjoyed themselves (quite stickily). 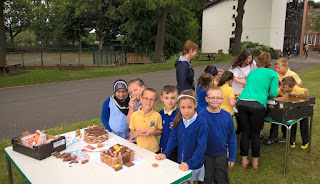 Sadly, after the final group left, the gazebo caught the wind and took off in a suicidal bid for freedom, but this has been replaced.

We would like to thank the CA for the funding and (again) Professor Dickey for some of the ideas.

Posted by Classical Association at 03:54